Books and Articles on the Tortoise in History, Literature, and Art

There are a surprising number of volumes written, not as guides or manuals to keeping tortoises, but as studies or observations on the role of tortoises in history, in art, in advertising, and even as models for garden statuary.

Gilbert White's, The Natural History and Antiquities of Selborne, was first published December 1789 and has never been out of print to this day.  White's accurate study of the flora and fauna of his native parish make delightful reading, and tortoise keepers will be especially interested in his observations on his tortoise, Timothy.  The Latin name of the Testudo whitei (Bennett) subsequently memorialised this most famous of tortoises.  Here is an excerpt from White's diary from 5 June, 1787:

The tortoise took his usual ramble, & could not be confined within the limits of the garden. His pursuits, which seem to be of the amorous kind, transport him beyond the bounds of his usual gravity at this season.  He was missing for some days, but found at last near the upper malt-house.

White's volume has spawned a number of subsequent books and articles, among them:  June Chatfield's "Selborne and the Tortoise Connection", published in Testudo 2 (4), 1986.

The Portrait of a Tortoise, Chatto and Windus, 1946 (reprinted by Virago in 1981) with an introduction by Sylvia Townsend Warner  (ISBN  0-86068-218-8) is a compilation of White's recorded notes from his Journals and The Natural History and Antiquities of Selborne.

And there is even a volume written from Timothy's point of view: Verlyn Klinkenborg, Timothy's Book: Notes of an English Country Tortoise, Portobello Books, 2006 and in paperback 2007 (ISBN  978-1-84627-055-0).  This delightful and witty book is packed with Timothy's wry observations on his fellow animals and the humans he comes into contact with, along with meditations on memory, the weather, and life in the slow lane.

One of Timothy's namesakes -- another Timothy -- has also been memorialised by Rory Knight Bruce in Timothy the Tortoise:  The Remarkable Story of the Nation's Oldest Pet, Orion, 2004 (ISBN 0752868721).  This is the story of Timothy the Tortoise, who died in April 2004 at the age of 160, and was thus Britain's oldest living resident at the time.  It is thought that Timothy was born in Turkey, perhaps in 1844, perhaps earlier, and he lived for much of his life with the Earls of Devon in the Rose Garden at Powderham Castle, Devon.  This book traces his life as a ship's mascot, through to the time when he arrived at Powderham Castle at the age of fifty, to his death in 2004.

Another celebrity in the animal kingdom was Lonesome George.  Before his death in June 2012, Lonesome George lived at the Charles Darwin Research Station on the Island of Santa Cruz, and was labelled as one of the rarest creatures in the world, as he was thought to be the sole surviving tortoise of his species (Chelonoidis nigra abingdonii) from Pinta Island in the Galapagos.

Henry Nicholls:  Lonesome George: The Life and Loves of a Conservation Icon was published in hardback by Palgrave Macmillan in 2006 (ISBN-13: 9781403945761/ ISBN: 1403945764 and was re-titled as Lonesome George: The Life and Loves of the World's Most Famous Tortoise in the paperback version published by Pan).  George has come to symbolise the mystery, complexity and fragility of the unique Galapagos archipelago, and the challenges of conservation worldwide. 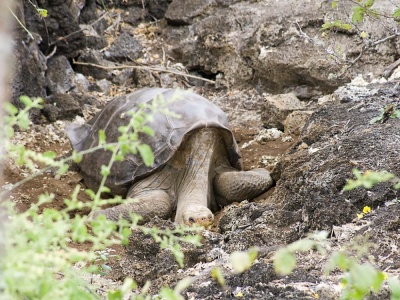 Many writers of fiction have been fascinated by tortoises, and Roald Dahl wrote Esio Trot, first published by Jonathan Cape in 1990, and then in paperback by Puffin Books in 1991 (reprinted in 2001), ISBN  0-141-31133-9.  It features illustrations by Quentin Blake and is the story of a shy man who is in love with a very kind woman, and of the small tortoise that brings them together. (The very astute will note that Esio Trot is Tortoise spelled backward!).

A very interesting cultural history of the tortoise is Peter Young's Tortoise, Reakton Books, 2003 (ISBN 1 86189 191 1).  This is a fascinating volume, profusely illustrated, with examples of the tortoise in evolution, myth, folklore, art, literature, space research, veterinary medicine, advertising, and much more.

In the Spring 2004 edition of Hortus (the excellent gardening journal) is a fascinating article by Katie Campbell on "The Tortoise in Garden Sculpture:  Meaning and Symbolism in the Modern World", The Bryansground Press, No. 69, Volume 18, Number 1. ISSN:  0950-1657. (www.hortus.co.uk).  This article surveys the role of the tortoise in garden art, from the 'tortoise islands' in the Han Dynasty (206 BC to AD 220) through the Renaissance, the great Victorian gardens, and the 20th Century.

And of course preceding all of these is the fable, said to be from Aesop, of The Tortoise and the Hare.  A short summary:

One day a hare sees a tortoise walking slowly along and begins to laugh and  mock  him. The hare challenges the tortoise to a race and the tortoise accepts.  They agree on a route and start the race. The hare shoots ahead and runs  briskly for  some time. Then, seeing that he is far ahead of the tortoise, the hare thinks he'll sit  under a tree for a while and relax before continuing the race.  He sits under the tree and soon falls asleep. The tortoise, plodding on, overtakes the  hare and finishes the race. The hare wakes up and realizes that he has lost the race.

The moral, stated at the end of the fable, is:  "Slow and steady wins the race."

Walt Disney turned the story into numerous episodes in his cartoon films, including Silly Symphonies in 1934, and in the book, Goofy's Big Race.

And it has been used by countless others in art, literature, advertising -- even in mathematics, where the "tortoise and the hare"  algorithm is an alternate name for Floyd's cycle-finding algorithm.

There is a wealth of fascinating and entertaining material about tortoises out there, and only a few examples have been listed in this article.  Whether it is a gift you are looking for or just a treat for yourself, we think you will find plenty in these volumes to give you hours of pleasure.